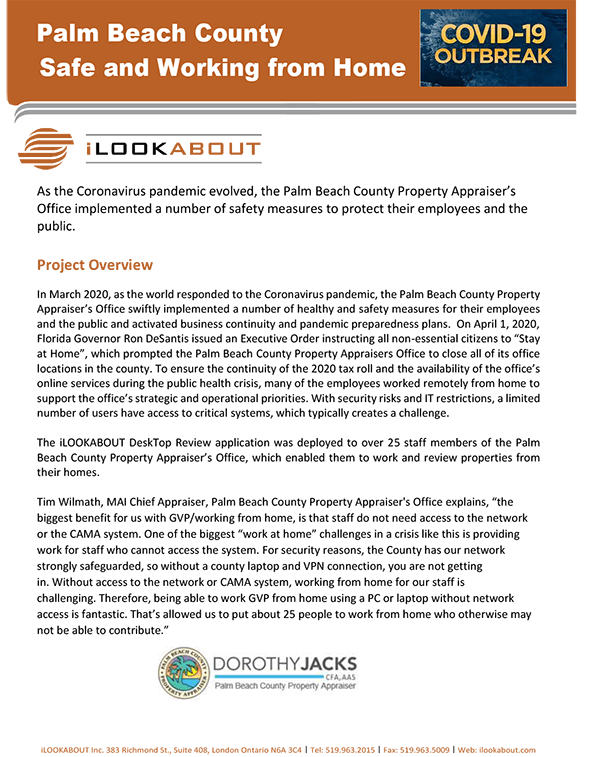 As the Coronavirus pandemic evolved, the Palm Beach County Property Appraiser’s Office implemented a number of safety measures to protect their employees and the public. 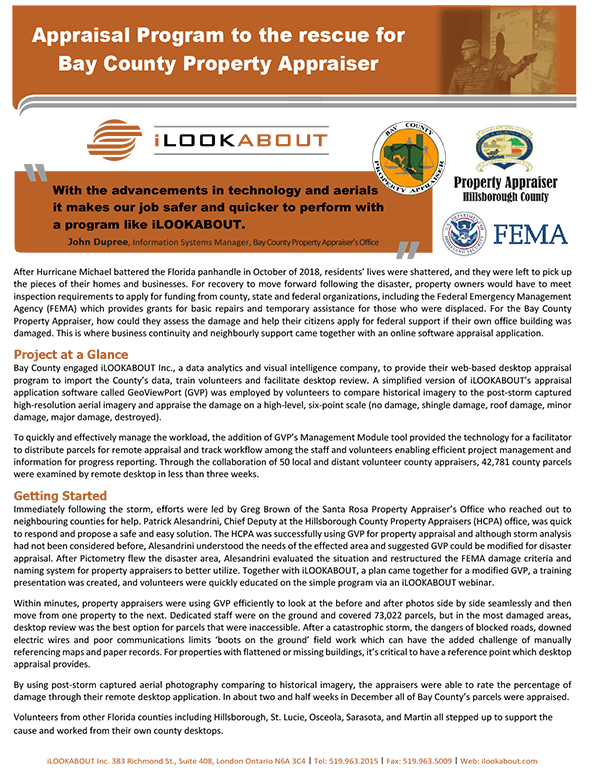 After Hurricane Michael battered the Florida panhandle in October of 2018, residents’ lives were shattered, and they were left to pick up the pieces of their homes and businesses. For recovery to move forward following the disaster, property owners would have to meet inspection requirements to apply for funding from county, state and federal organizations, including the Federal Emergency Management Agency (FEMA) which provides grants for basic repairs and temporary assistance for those who were displaced. 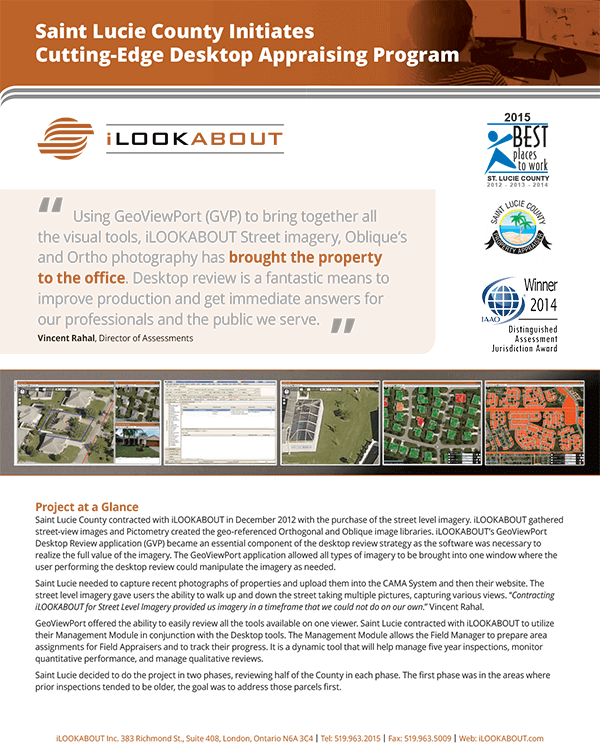 Saint Lucie County contracted with iLOOKABOUT in December 2012 with the purchase of the street level imagery. iLOOKABOUT gathered street-view images and Pictometry created the geo-referenced Orthogonal and Oblique image libraries. iLOOKABOUT’s GeoViewPort Desktop Review application (GVP) became an essential component of the desktop review strategy as the software was necessary to realize the full value of the imagery. 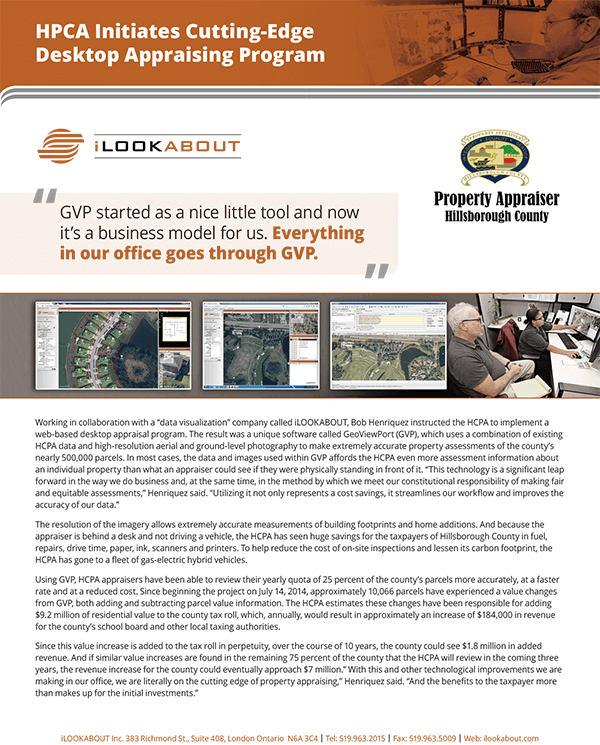 Working in collaboration with a “data visualization” company called iLOOKABOUT, Bob Henriquez instructed the HCPA to implement a web-based desktop appraisal program. The result was a unique software called GeoViewPort™ (GVP), which uses a combination of existing HCPA data and high-resolution aerial and ground-level photography to make extremely accurate property assessments of the county’s nearly 500,000 parcels. In most cases, the data and images used within GVP... 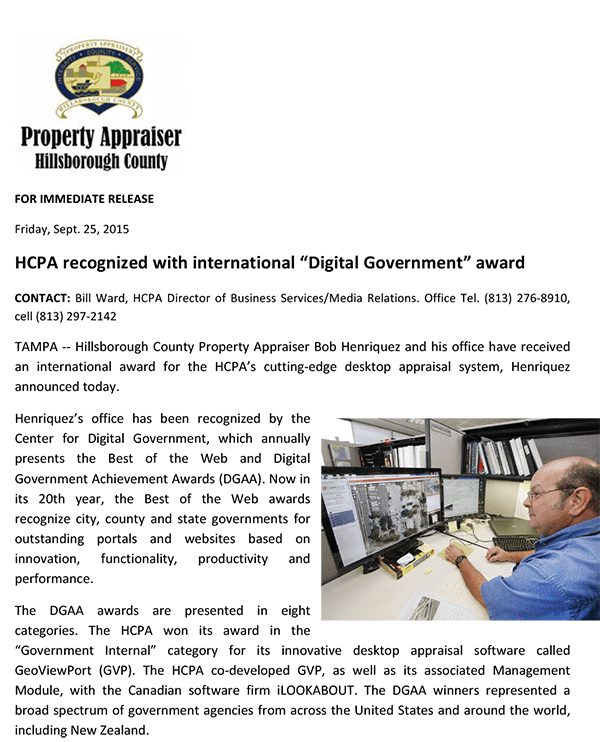 Recognized by the Center for Digital Government, which annually presents the Best of the Web and Digital Government Achievement Awards (DGAA). Now in its 20th year, the Best of the Web awards recognize city, county and state governments for outstanding portals and websites based on innovation, functionality, productivity and performance. HCPA won its award in the “Government Internal” category for its innovative desktop appraisal software called GeoViewPort™ (GVP). The HCPA co-developed GVP, as well as its associated Management Module, with the Canadian software firm iLOOKABOUT. 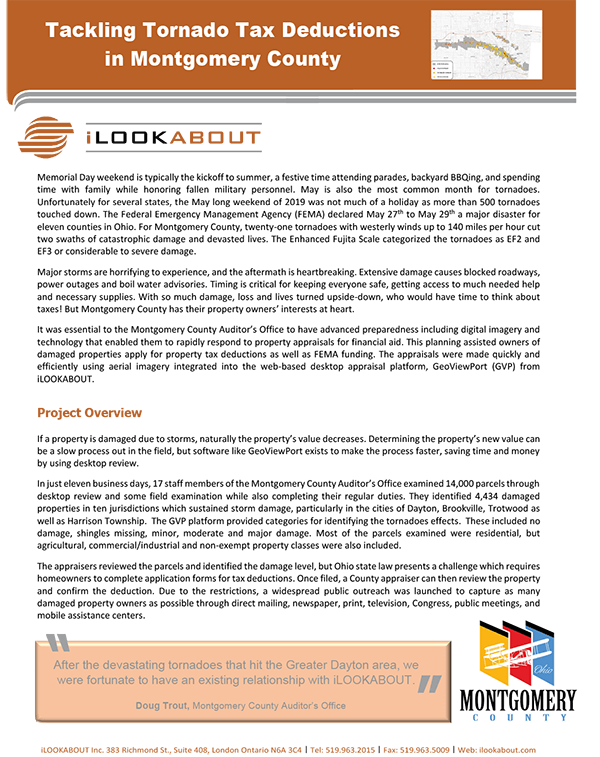 Memorial Day weekend is typically the kickoff to summer, a festive time attending parades, backyard BBQing, and spending time with family while honoring fallen military personnel. May is also the most common month for tornadoes. Unfortunately for several states, the May long weekend of 2019 was not much of a holiday as more than 500 tornadoes touched down. The Federal Emergency Management Agency (FEMA) declared May 27th to May 29th a major disaster for eleven counties in Ohio. For Montgomery County, twenty-one tornadoes with westerly winds up to 140 miles per hour cut two swaths of catastrophic damage and devasted lives.